Inventors Kit for Arduino, Pack of 20

Inventors Kit for Arduino, Pack of 20 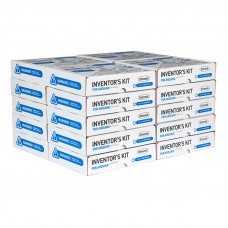 Add to wishlist
Overview
Get to grips with programming & hardware interaction with our Inventor's kit for Arduino! The simple way to learn about creating circuits & code. Classroom 20pk
The Kitronik Inventor's Kit for Arduino 20 pack is a great way to get started with programming and hardware interaction with the Arduino in the classroom. This Inventor's Kit contains everything you need to complete 10 experiments including using LEDs, motors, LDRs and capacitors.
Arduino is an open-source code-able electronics platform, which has been designed for anyone making interactive projects. Arduino board can process inputs from many sensors, and also control outputs such as LEDs and motors.
The Arduino is controlled by the code with which it is programmed. This code is written in the Arduino programming language, using the Arduino development environment. Once complete the code is easily transfered to the Arduino board using a simple USB lead.
To get you off to a flying start, we have included an easy to follow tutorial book which guides you through creating the 10 experiments. You don't need any experience with programming as the tutorial book will guide you every step of the way. You'll be programming and creating circuits in no time!
Note:
This kit requires assembly.
No soldering is required and you can build your first circuit in minutes!
This kit does not include an Arduino UNO.
Features:
No soldering required - build your first circuit in minutes!
Make 10 experiments included in the provided step-by-step tutorial book.
All parts are included to conduct the 10 experiments.
Small Prototype Breadboard included for fast prototyping.
This is supplied as a 20 pack, making it a great choice for the classroom.
Contents:
Each of the 20 Inventor's Kits for Arduino contains the following parts:
1 x Mounting Plate.
1 x 7 Segment Display.
1 x Servo.
1 x Potentiometer - Vertical Type (finger adjust) 100K.
1 x Finger Adjust Spindle.
4 x Plastic Spacer 10mm.
1 x Small Prototype Breadboard.
1 x Terminal Connector.
4 x Push Switch.
1 x Motor.
1 x Transistor.
2 x Red 5mm LED.
2 x Orange 5mm LED.
2 x Yellow 5mm LED.
2 x Green 5mm LED.
1 x RGB 5mm LED.
1 x Fan Blade.
5 x 2.2KΩ Resistor.
5 x 10KΩ Resistor.
10 x 220Ω Resistor.
20 x Male to Male Jumper Wires.
1 x 470uF Electrolytic Capacitor.
1 x Piezo Element Buzzer.
4 x Pan Head M3 Machine Screw.
1 x Phototransistor.
Requires:
An Arduino board such as The Maker Uno Plus.
Phillips Screwdriver.
Terminal Block Screwdriver.
Micro USB Cable.