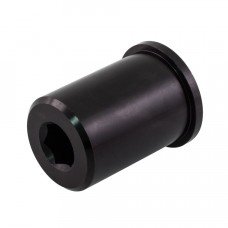 OUT OF STOCK FOR SEASON

Colson Live hubs enable a direct drive system via a powered hex shaft (like in the VersaChassis). The hub is also slightly longer than previous options, allowing a better fit for both 1.5” and 2” wide wheels.

Colson Dead hubs allow the wheels to be powered by a sprocket, pulley, or gear. The hub now features an integrated VersaKey pattern, providing seamless interaction with all VEXpro sprockets, pulleys, and gears. Plus, the new hub also features a counter-bore, allowing teams to use either flanged or non-flanged bearings.
•Colson Dead Hubs are VersaKey compatible
•Machined from 6061-T6 Aluminum
•Black anodized for superior performance